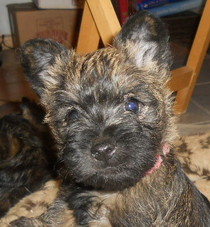 Here is Sancha - a real sweetheart and great little companion. She went to be a therapy dog in December 2010 for a family who had lost a big dog (Anatolian Shepherd) to Cancer. Even their family dogs were tramatized - so she had her work cut out for her. Here's a note I received from Sancha's new family: ************************************* Norma; I wanted to let you know that Sancha is settling in nicely, we love her so much. She is happy and healthy and sitting on my shoulder, as I write to you. Jack, my husband says he's never had an animal that just 'fits right in, as if she's known us forever....! Perhaps we have known her forever! William the Westie really does love her alot and Patch, Jack Russel/Border Collie, our older girl thinks she's 'cute'. Take care and hope your new babes are well! Nancy

Sarge became "Rowdy" in his new home, December 2010. This letter was sent by his family a week later. 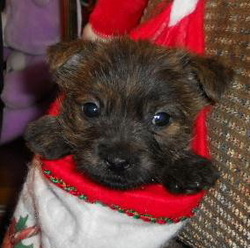 Little Rowdy has settled-in nicely and is loving life.  I can't believe how well he's bonded with us and how much he's already learned since he's such a little puppy.  He has slept through the night with no whimpering from the very first day.  We placed Augies kennel next to Rowdys cage so that they are separated but can see each other and everyone sleeps well. 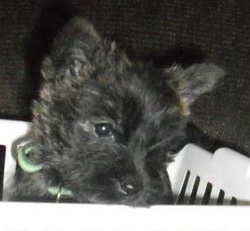 NORMA,  We named our pup, Lottie.  She is doing really good.  Cries at night when she has to go pottie.  She loves her toys and is fond of chewing on things.  Those little teeth are very sharp.  She is an aggressive eater.  Loves her food.  Was going to ask you what kind of food were you feeding them.  I have mixed some Science Diet with yours and she has also has Science diet moist canned food that she likes also.  Lottie is such a good girl and as sweet as she can be.  Love her already. God Bless Eileen